Encountering overgrown borders can be daunting. Particularly if you are trying to restore them, and working on a budget, rather than being able to go for raze, remove, replant.

Sorting through, and watching the development of your plants may reveal some gems, as well as some monsters. The trick is to weaken the monsters (as in some cases a JCB and 20ft of excavation would be needed to remove them completely) to leave space and nutrients for other plants and work out how else you can enhance and encourage the gems. 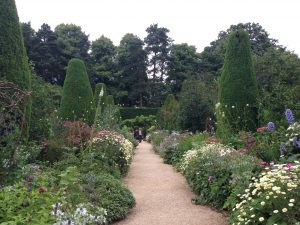 Herbaceous borders (like these at Hidcote) need regular division every few years to keep them in shape. As a general rule this means digging out plants and either chopping them up with a spade or knife, or teasing them apart by hand or with two forks, to make several smaller plants. Gnarly old parts can usually be discarded and the remaining sections of fresher material can be replanted in the desired spots. Bear in mind that you want to allow them a few years’ growing space as you’re working to reshape your border for the next 5 years or so. Many perennials prefer division in autumn, but late flowerers are done in spring.

When you’re faced with a series of monsters, which have gone unchecked for 5-10yrs, you need a bit of help. I’ve tried gradually easing back some of the worst offenders (eg Acanthus, Helianthus) by removing some of the unwanted newly formed offshoots back in spring, trying to check the spread of the main root clump. I’ve also done some risky out of season lifting and replanted where something was completely out of place, preferring in this situation to risk losing a plant that was no longer serving its purpose, rather than leaving it to ruin the look of an area.

And I’ve also been looking out for some of the smaller star performers which could be lifted and divided in the autumn. I’d like to bolster their numbers and create more of an even flow of these through the border. However this week I got a tip from Gardeners World which might reduce my ever growing list for Autumn.

The idea is to propagate by division, but from vigorous, flowering plants in summer. I had already sneakily done this in early July with some rather lurid pink geraniums which were plonked in the middle of a cool-coloured bed. They have taken well and the small clumps I cut and tucked in nearer some more tropical-style plants are now leafy and happy 3 weeks later.

I’m going to try it with Astrantia major (in the last week of July). Digging up a plant, cutting back all the growth, and this time potting it into 9cm pots with some potting compost and vermiculite – and growing on in the nursery until I want to boost a wild, shaded area with a good group of them in September.